Step Up to the Throne 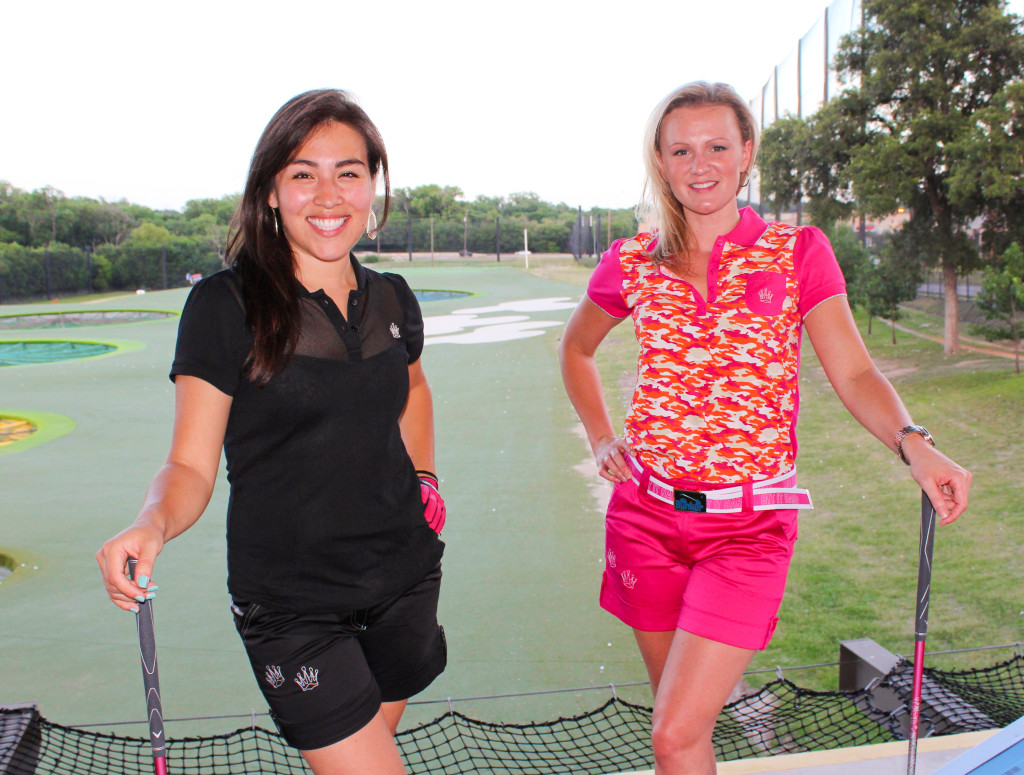 Forget the whole being treated like a princess nonsense! Why not be treated like a queen? UK based Bunker Mentality’s women’s line, Queen of the Green, will gladly put a crown on you. All over you, as a matter of fact.

I have to be honest and say I don’t exactly remember when, or how, I first heard of Bunker Mentality. I do know that I have been chatting with them about a new mentality for a couple years now, and they have proven to be experts in designing anything but classic or plain golf apparel. Bunker Mentality doesn’t have a presence on the PGA Tour and you won’t find them at your local American golf club, but it is worth looking into the brand, and the Queen of the Green collection, if you want to invest in highly unique pieces that won’t be seen on half the golfers you encounter on the fairway.

A year or so ago, I was praising the smooth traditional look of a particular golf apparel brand on Twitter, when Bunker Mentality interjected that they didn’t understand why “we insist on holding onto tradition in golf apparel.” That isn’t the first conversation on the topic. This daring label frequently attempts to drive the thoughts of golfers toward bold uncharted territory. Though there is a huge appeal for classic, traditional style in the golf industry, there is room for a new path. Look at the history of the fashion industry: goth, hip-hop, hipster, loose luxury. Trends are always adopted by those looking for a new opportunity to stand out, or eventually, fit in. To grow the game of golf there must be an offering for those that don’t relate to “stuffy” or “plain.” Khaki and striped polos just aren’t for everyone. Thank goodness!

The most notable & signature difference between Bunker Mentality and other golf apparel brands designing with flare, is the heavy incorporation of patches and “inspirational/suggestive” message graphics. Notes like “Hit it Hard” and “Let’s Play a Round,” are found on many pieces. Though you might not want a whole closet full of these items, a few fun polos would certainly not hurt! I own two pairs of shorts with “Who’s Your Caddy?” slapped on the seat. Feel free to look.

I have gotten more comments and compliments on the Queen of the Green items I own than any other golf apparel pieces in my golf cave, from both golfers, and those that have never picked up a club.  (For those of you that caught that, no I don’t have a golf cave.  YET.)  Shirts with mesh sweetheart necklines and bright camo print just seem to draw attention. I personally commend Bunker Mentality for pushing the limits of golf fashion, and will continue to incorporate their sassy style into my golf wardrobe.

Last, as the fashion world has, I have been obsessed with Hawaiian print in 2014. I told Bunker Mentality in the spring that if anyone could pull off a stellar Hawaiian print golf polo, it would be them. The assured me immediately that they were on it.  See below the brand new “Bunker 5.O Polo.” It’s smoking hot and oozes with island delight. Yum! 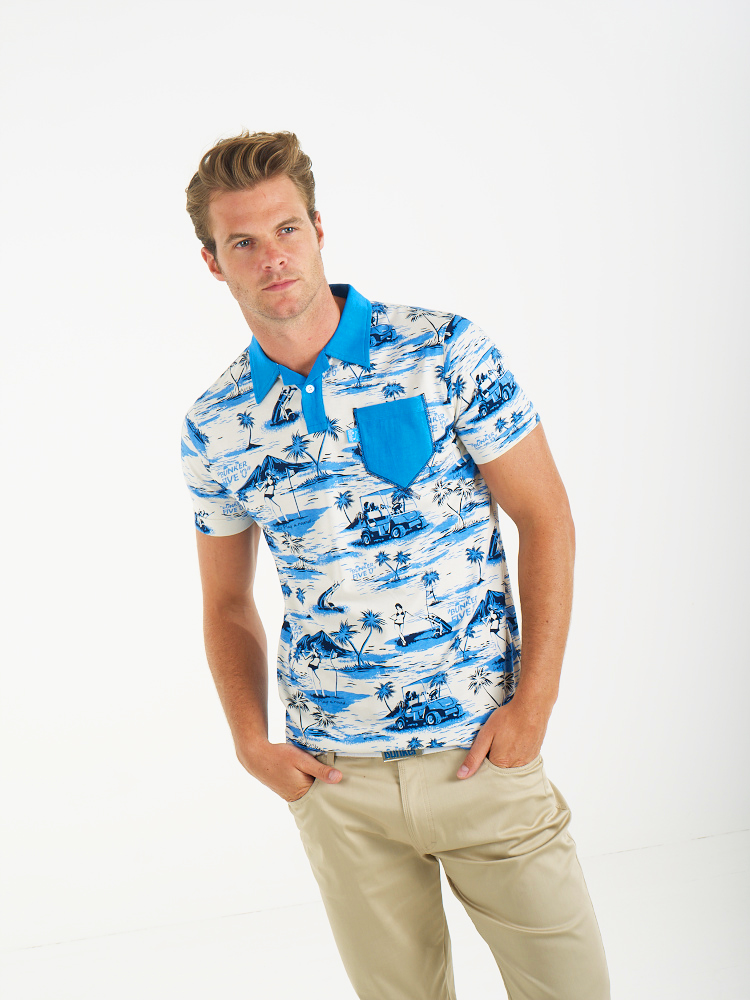 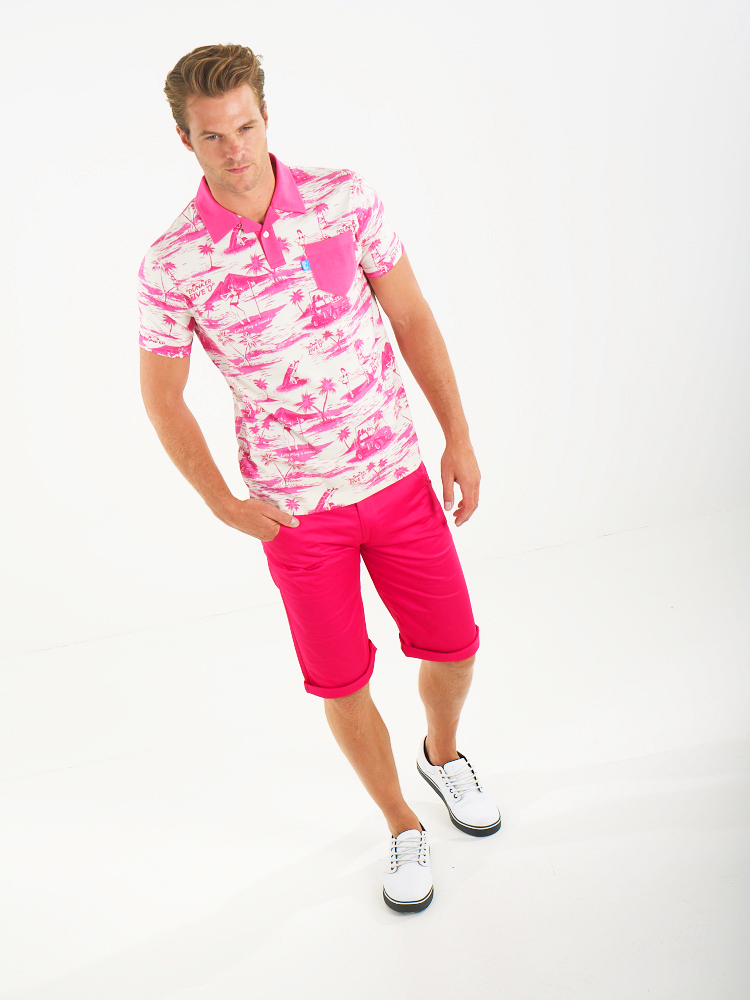 Thoughts on Queen of the Green from the Fairway Threads Review Crew:

Danielle- “The camo outfit was fun, but I didn’t care for the fit. The sleeves on the top fit too tightly on my biceps and the shoulders were a little right. Also, the shorts were made more for a woman that is less curvy than I am, I believe. They were tight through the seat, but gapped at the waist.”

Marisha- “I loved the mesh top. It brings a little edge to the golf polo. I also liked the sweetheart cut where the mesh met the solid part of the shirt. The fabric was very comfortable yet sort of see through, I had to be sure to wear a black undergarment. The shorts were cute! The only issue I had with them is the length. I prefer shorts to either to hit either at the knee or at the upper thigh. These hit mid-thigh which I personally find to feel awkward.” 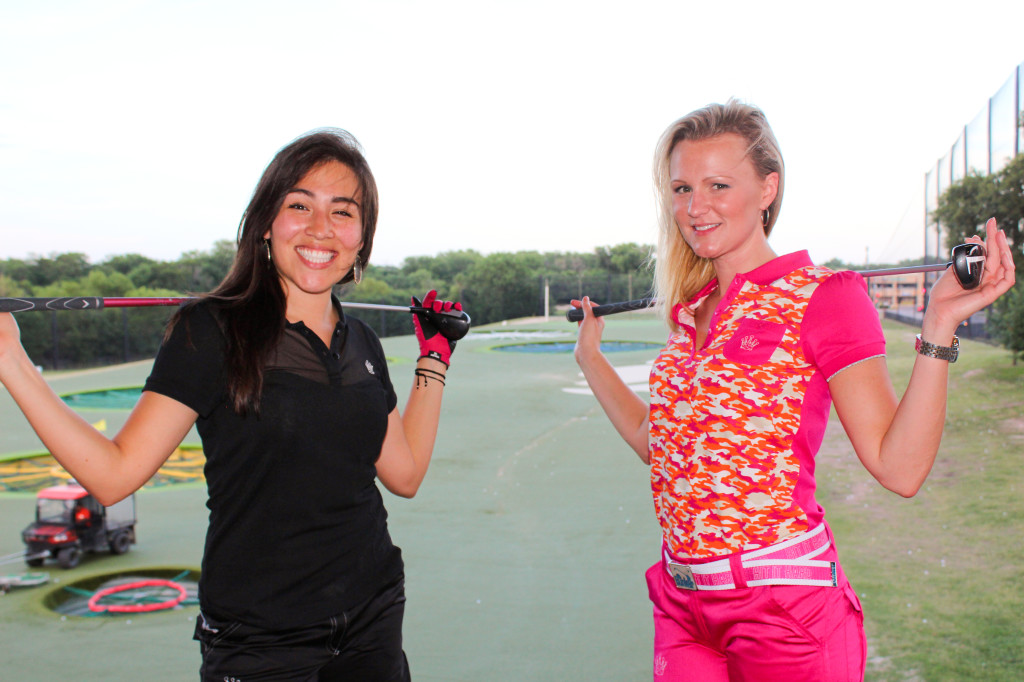 Shop Bunker Mentality or Queen of the Green

← No Complaints
Piece of Me →