I Don’t Know Much: Golf Fashion Thoughts from a Non-Golfer

Before I start diving into the topic at hand, and you start wondering who this idiot talking is, let me first introduce myself. My name is Derek (@derekRL24) and I’m not a golfer.   To say I loosely pay attention to golf might be an overstatement. Yes, I’m one of those people who hear golf mentioned and ask how Tiger is doing. Kara asked me to write this post because I’m a huge sports fan and I write a blog that revolves around a lot of uniform design discussion.  It’s not fancy, but it’s funny.  You can check it out at Rants and Raves from a Sports Junkie: derekrl24.blogspot.com  Now, on with the rant.

Every year, the one golf event I pay close attention to is The Masters (casual fan alert, no one should be surprised). Therefore, I figured I should probably discuss the looks seen this year at the Masters, since everyone else was. Forgive me if I missed something good, while I was flipped over to soccer or hockey. I’m will point out some pieces I would wear and some that you couldn’t pay me to wear.
Let’s start with adidas. They had an interesting marketing concept. The world recognized brand (I am a soccer fan so, respect) had all their golfers wearing the same apparel lineups for the week (almost, thank you Jason Day for the screw up).

As a non-golfer, I love the idea being able to incorporate a team uniform. I just didn’t really care for the execution of this attempt. Green is an interesting color to work with. Some colors can go with anything, but this green is definitely not one of them.  For me, the Thursday look, using on a lime green accent, was just a little too strong.  However, I really like the reverse on Sunday, with lime as the dominant color and white accenting.  I would wear it.  The Friday look was bland and boring, something someone’s dad would wear on the local municipal course. The Saturday look seemed ok for a regular weekly event, but not something I’d wear at The Masters. It was simple with no color. I think you need some color for The Masters simply because of the time of year and the event itself.  Show off your creativity adidas!
Next up on the list is Nike (Further proof I know nothing about golf fashion. Starting with Nike and adidas) Basically, I’ll just discuss the two big dogs on Nike’s golf payroll, Tiger and Rory: 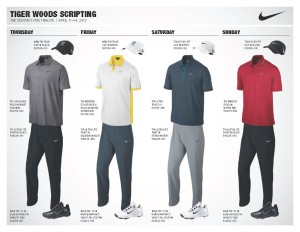 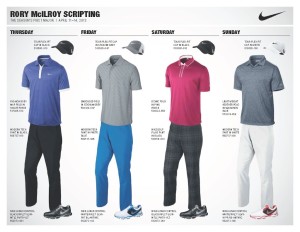 Let’s get this one out the way: Tiger on Sunday is classic and I have nothing bad to say about it. I know it’s been the same for years, but that is the whole point. Besides the Sunday Tiger uniform, his Friday shirt was the only other decent item he wore for the weekend. Tiger really just played it safe the whole weekend.  I can respect the simplicity, but come on Nike, step it up!  You know the entire world was watching that canvas.
Rory didn’t step out of the box too much either.  Thursday was boring, Friday and Saturday are really good, and Sunday is back to boring. I actually really like Friday’s style. It is not too crazy, and the look is something I would wear, even off the golf course.  I really like those electric blue pants.  Saturday is a great example of how to use color to turn a simple concept into something really interesting.
And then there is Rickie Fowler.  Rickie definitely tries harder than any golfer to make an impression. The problem with this is the impression he makes is not always well-received. The all green on Thursday was just awful.   It wasn’t even a shade of green that stood out well on the golf course.  As stated earlier, green is a tough color to work with and should be used carefully. I like the idea of Friday’s look, but I am not a fan of the fade from blue to green.  All green on the front would have looked much better.  Even though Kara would strongly disagree (she hate this Puma shirt), Saturday is his best look by far, and that’s not saying much. It is something I’d wear, but with a hat that has a bent bill. Rickie, enough with the flat billed hats, you are a golfer not a hip hop star.  As for Fowler’s Sunday staple?  If anyone has ever read my blog, you would know how I feel about orange. There is an application process for orange to be allowed for use. Rickie’s Sunday look would not make it past step one in that process.  I don’t care what college you went to, horrible doesn’t begin to describe the all orange look. 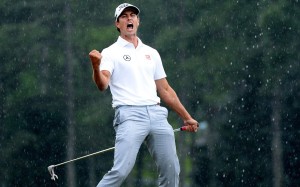 I guess Adam wasn’t expecting to win going into the weekend with that choice of apparel. It is beyond bland. You’re at Augusta! One of the most beautiful places anyone will ever see and Uniqlo (whoever that is) chose to put him in simple grey and white.  Someone needs to introduce him to a fashion advisor.  Kara, send in your resume STAT!  Yes, I would wear this if I was out golfing, but I would never wear it during a round at The Masters.  Augusta is too big, too important, and most of all, too beautiful to waste a day wearing boring stuff like this.
Whew! Rant done.  Just some thoughts from a non-golfer, on what a few guys wore at likely the only golf event I will watch this season.  I’ve spent time discussing and complaining about uniforms in other sports, so I thought I’d give golf the old college try.  Hey Adam, Tiger, and the rest of you tour guys, if any of you are reading this, don’t be offended, I am totally clueless anyway.

← Come Dressed to Play
Wear This Not That →

1 comment for “I Don’t Know Much: Golf Fashion Thoughts from a Non-Golfer”