Up and Down- US Open

Week in and week out, the PGA Tour starts to show a lot of similarities.  That may sound crazy, as tournaments are at new locations each week and for the past few years there has been much parody in golf. However, it is true in some ways, and not just for the given fact that mother nature is going to cause some sort of weekly mess.  By this point, most guys start to wear similar, if not the same, looks from week to week.  One of the reasons major weeks are so fun is that they are anything but mundane or typical.  A major calls for much more preparation and pageantry, and no aspect of the game escapes this demand, especially not apparel choices. Special styles are created for practically each golfer in the field by their respective sponsors, with one collective theme: get noticed. US Open week 2013, allowed some guys to do just that.  Whereas, most of the chatter came from those appalled at the a few obvious fashion fiascos, a few guys still made a favorable showing.  Either way, up or down, it was fun to have a week of bold looks to discuss.  Taking risks does get one noticed, and that is ultimately the point in this case.

Hunter Mahan took a shellacking during his Saturday round at Merion, for wearing this…well…this..umm.  Yeah, most of us had no idea where to even start the review of this Under Armour combination.  The electric blue hat and belt paired with the gray slacks are totally fine.  I will never complain about electric blue.  Even the shoes would have been acceptable, had he worn almost any other shirt.  It wasn’t even a plain red polo, which would have been bad enough.  Mahan’s shirt had stripes in it, only adding to the business.  Hunter, the golf would has spoken and the answer is NO.  You may never wear this again. 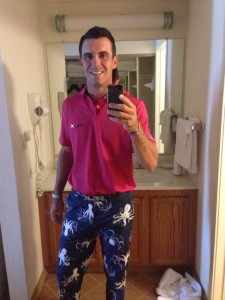 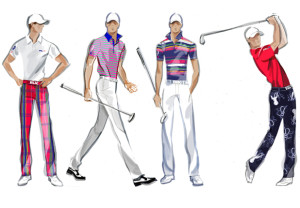 Billy…oh Billy.  If there is one piece we will remember this week it will undeniably be the Ralph Lauren RLX Octopus print pants that Billy Horschel wore Sunday.  He was certainly proud of them as he tweeted the picture above out to the world showing off his “highly anticipated, highly controversial” pants.  Like them or hate them, and I assume most of you hate them, they earned Horschel plenty of attention during the final round of a major championship.  Not exactly an ignorant move on the part of Horschel and Ralph Lauren.  I am actually proud of Billy.  It made Sunday all the more fun. 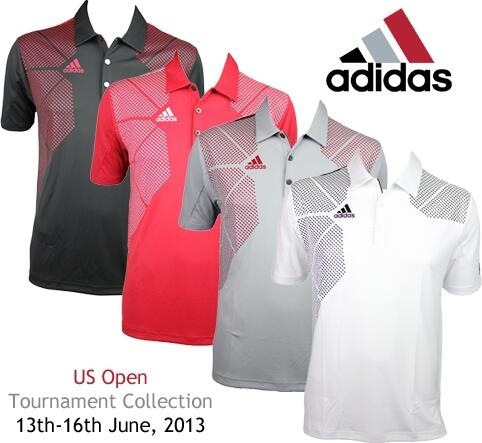 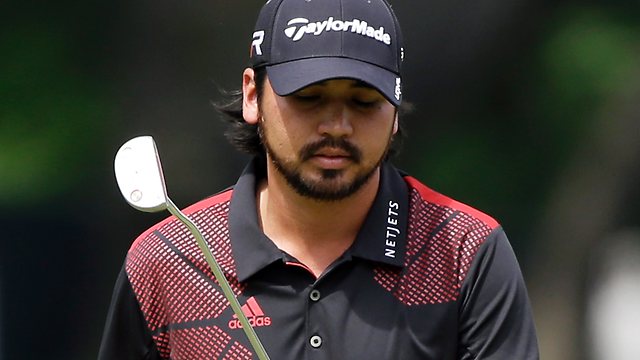 I have praised adidas all year long for their consistently good looking tournament collections.  It was bound to fall apart eventually, I guess.  I don’t like this lineup, as seen on Jason Day, at all.  It didn’t take much creativity and imagination for adidas to create the exact same style of shirt for each round.  Why?  Did they just completely run out of steam after an entire season of design success?  Also, I preferred it when the entire adidas team was wearing the same look each day.  Not sure what put a halt to that effort, but it is a shame.  That marketing tactic was drawing a lot of attention for the brand.  I do, however, give adidas props for the all gray with red accents/accessories style worn by Sergio Garcia below.  You don’t often see a base of all gray and I like it for a change.  At least adidas team members stayed with the same color palette for the tournament. 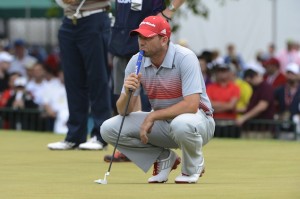 I will go with another split decision on the Ralph Lauren RLX looks below, worn by Luke Donald.  This first shot below captures exactly what I am convinced the average American pictures when they hear the words “country club member.”  Striped navy and hunter greet Polo shirt, paired with white pants and an awful white visor.  No thank you.  Donald’s shirt even had “US Open” embroidered on the back, just in case he forgot where he was for the week. In contrast, I like the second version of the striped polo, that Donald wore on Sunday.  I am a huge fan of black and white stripes and when you toss in a bit if neon, oh mercy, I am sold.  I especially appreciate that only the left sleeve has only one neon green stripe.  What a perfect touch. 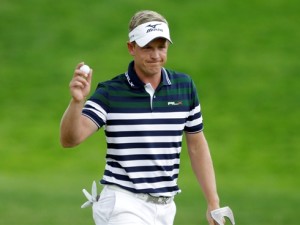 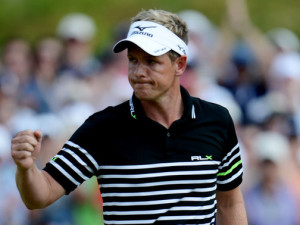 Why not close out with a thumbs up to our 2013 US Open Champion, Justin Rose?  Not because it is the most, obvious thing to do, but because I actually liked the work Ashworth brought to the course this week.  You won’t often hear me say much about Ashworth apparel.  I usually find that it doesn’t demand much of my attention.  Good for them for partnering with a guy like Justin Rose, who has played so well this season, that you can’t help but notice him when he is in the field.  I saw this shirt when the Ashworth US Open script came forth, and I saw it on the rack at Golfsmith earlier this week.  I like it.  It is different, yet classic all at the same time.  Although, I don’t prefer orange, I feel Ashworth’s style and palette this week was solid.  Congrats to both Ashworth and Justin Rose.  What a victory to watch! 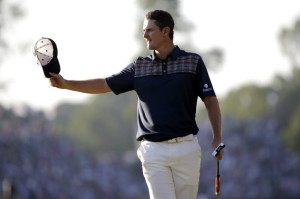 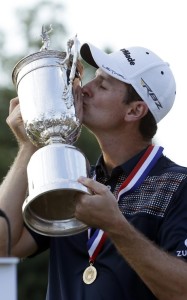