Up and Down- Players Championship 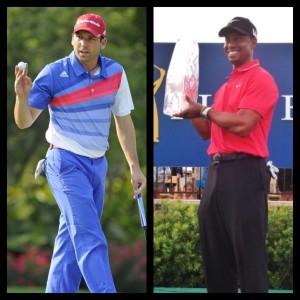 Look, before I start can we all just agree to remember I am talking about golf apparel.  I am not taking a stance on who is a better golfer or more deserving of a win this week, and by no means am I discussing who is more likable.  Topic at hand is who looked better on the fairway.  Though, can I just say, that if there was no drama in golf it would be so boring.  Most of the world already thinks it is boring anyway, so why are we complaining that Sergio adds some flare?  Speaking of…

Up: Sergio Garcia in adidas Golf

For the Players Championship, adidas continued their reoccurring team concept, dressing each of their tour staff in the same attire for the tournament.  Now, we all may get tired of this move by the end of the season, but I for one am still loving it.  Aside from the genius marking and advertising strategy, the style has been fresh and on point.  Though Sergio isn’t technically the only one I am giving my thumbs up to, he was the one we saw the most of, since he worked his way to the top of the leader board early in the week.  I was impressed with all four versions of the adidas 2013 Players Championship Polo.  The diagonal stripes and one off sleeve makes the look fun and interesting.  You can purchase one for under $65.  Just do it.  Sorry Nike, adidas wins this week…style award anyway.

Down: Tiger Woods in Nike Golf
Listen, this will basically be my stance every week.  Tiger looks blah and boring almost every time he sets foot on the golf course.  Always has, always will.  Some would argue that is totally fine because he does not need his apparel to be unique, since being the best golfer in the world is unique enough.  Probably true, but he still gets a thumbs down from me today.  First of all, Tiger didn’t wear pink all week.  Not even a ribbon.  Weak move.  Tiger has made it clear by his actions, many times over, that he does not have to go with the standard flow, but sometimes, it’s the right thing to do.  Nike Golf should have made sure the face of their brand wore some pink this week.  Furthermore, take a look at the friendly little image below from Saturday’s round.  The eye is drawn to Sergio, who looks vibrant and full of energy (yeah, yeah apparel not personality) and Tiger looks drab.  Then on Sunday, Tiger swung the pendulum over to gaudy as many were questioning if he had on freaking red velvet! I mean, that would be a new spin on his traditional Sunday uniform, but maybe a little much.  What’s next?  Gold pinstripes in his black pants?
Up Sergio. Down Tiger.  A very different result from the outcome of the actual golf portion of this week’s tournament, but at least Sergio walks away with something.  I am sure it will not help him sleep tonight, but looking good is half the battle right? 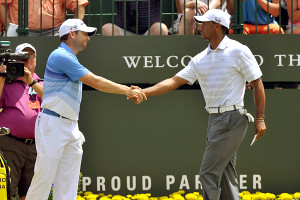