Up and Down- PGA Championship 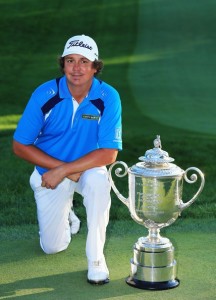 Allow me to start on a down note, because the majority of this post will focus on the up. The down of the 2013 PGA Championship for this golf apparel blogger is that I saw basically none of it. In short, my cable provider Time Warner Cable (poor choice it seems) has recently put the CBS Network on blackout. Additionally, I could not get the “live” stream on the PGA Championship website to work. So, I saw a bit of the featured pairings each day and that was it. Yes, I could have gone to a sports bar, and yes, I could have watched the re-broadcast on Golf Channel. However, I did not have the opportunity. Thus, I will spare you my further complaining and fill you in on what I did see, which was great stuff.

Look, not everyone on the PGA Tour is an “oil painting” as one of my caddie buddies would say. Likewise, not every golfer has an apparel partnership, a sense of style or cares about the look they are presenting on the course each week. However, I am always surprised (appalled) at the apparel choices worn on Sundays by guys that were clearly in contention going into the final round. Anyone watch Big Brother? On eviction night you can usually always expect that the house guests “on the block” that week will be dressed in the best outfit they can pull out of their duffel bag. Even these “average Joes” know that when you are on TV in the spotlight, you dress to impress. It completely baffles me why so many professional golfers fail to consider this when their big moment arises. Some would say the mindset should be kept on playing golf and winning a tournament. I agree, however, someone on that individual’s team should assist in planning this detail and make sure that if daily looks weren’t strategically put together for that tournament, that it is done before sunrise on Sunday.  Lights…camera…action.

Jason Dufner has a partnership with PGA Tour Pro Series Apparel, a division of Perry Ellis International. When I first saw Dufner during his final round of the PGA Championship, I was so taken aback. Perhaps, I have not seen Dufner as of late, but I cannot ever remember a time where I noticed what he was wearing and thought it looked great. He looked great on Sunday. The bright blue contrasted by navy in his polo matched with white pants and shoes were noticeably stylish. I then thought, finally, someone had taken a golfer, who does not usually attract an audience to his apparel, and enlightened him that he should spice it up a little for his charge to victory. I was so proud. Hey, even Jim Furyk looked more put together than normal, not good, just better than he usually does, mind you. Upon, contacting PEI (Perry Ellis International) I learned that a script had been created for Dufner for the entire week. Thus, some forethought had gone into his style. I still say this topic deserves the discussion, though. Outside of a major championship week, I have seen this failure to seize an opportunity happen several times. Don’t think I have forgotten Matt Kuchar’s embroidered Sea Island logo belt and boring khakis when he won the Memorial in May. My hope is that golfers begin to put more weight in their apparel choices. I know first hand, that some are lost causes, but one can dream.

Take a moment to check out Jason Dufner’s winning look below, along with my other two top picks of the week from Ashworth and Izod. For an apparel company you don’t hear about as often as some, PGA Tour Pro Series Apparel, has a few nice choices. The items are made from technical fabric and retail in range from $30-$60 for polos and $40 for the pants. Retailers include Macy’s, JCP, PGA Superstore, Academy, Gordman’s, Amazon and Olympia. 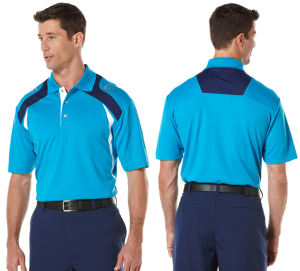 Who doesn’t love a redemption story?  Though, I have approved of most of Justin Rose’s looks this season, I have been a pretty tough critic of Ashworth’s golf apparel, at times.  Mercy did they turn that around last week.  Hey…Ashworth…TAKE NOTE.  The looks put together for Justin Rose for the PGA Championship were absolutely fabulous by my eye.  Fresh, crisp, current and appealing.  This is style, and this is where Ashworth should stay.  (See Below) Huge kudos for keeping the white belt to white pants only.  Some folks out there are listening! 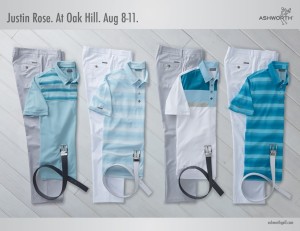 Last, the choices Izod put together for Webb Simpson were solid, as well.  I am a pretty consistent fan of what Izod presents, but this lineup pushed the bar slightly up, in my opinion.  I dig the red belt for one thing.  I also enjoyed the simplicity of the basic red polo paired with navy pants.  Plus, Thursday’s pants were fun. 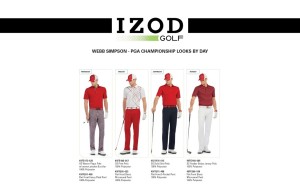