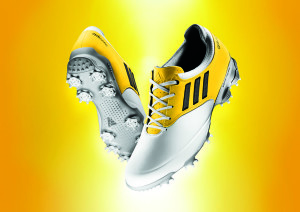 Welcome to the California coast.  Where the sun shines bright and black and yellow falls from the sky as parasailers paint the backdrop of a Sunday round at Torrey Pines.  On January 24th, adidas Golf launched the new adizero footwear at the Farmers Insurance Open at Torrey Pines in San Diego.

The adizero golf shoe is 10.6oz, with adidas touting they are so light that is feels like wearing nothing all.  Tour staff professionals Dustin Johnson, Jason Day and Brandt Snedeker were on hand at the launch to discuss the adizero difference and help promote the new footwear.  The trio engaged in a promotional activity that you would more likely see at La Jolla’s famed Scripps Park, as they flew remote controlled flying people in their own likeness.  Branded flag banners and adidas staffers with black and yellow painted faces and wigs could be found throughout the remainder of the event.  Meanwhile, at the Quatar Masters European Tour event, Sergio Garcia made a bold statement finishing T2 displayed in adidas adizero black and yellow attire and the new 3-stripes footwear.

A short two weeks later at the AT&T Pebble Beach National Pro-Am, TMaG (Taylormade – adidas Golf) was on the west coast once again showering out the black and yellow.  This go-around, Taylormade kicked off the #OneBucket Challenge, a marketing initiative to encourage golfers to try their new RocketBladez irons.  At participating retailers, for one month, Taylormade will provide #OneBucket of balls for golfers to try out the RocketBladez irons, with the hope that in “one bucket you’ll know” the irons are right for you.  The buzz around this campaign launch were the bright yellow bucket hats with black trim that Taylormade dealt out to those taking the #OneBucket challenge at Pebble.  The yellow bucket hats were prominently displayed for the week, adorning not only PGA tour pros, but conveniently those of celebrity pro-am players, such as actor Josh Duhamel and 49ers head coach Jim Harbaugh.  Taylormade also teamed up with the Monterey Peninsula Foundation to donate $50K to their foundation and another $50K to the charity-of-choice of any player making a whole-in-one on the famous par 3 no.17 hole at Pebble Beach.

Taylormade was well represented at the top of the leaderboard heading into final play of the AT&T Pebble Beach National Pro-Am with Snedeker sitting in the lead and Day, Robert Garrigus and Retief Goosen T6.  Pretty smooth marketing strategy to tie in black and yellow into both promotions  for TMaG at two of the most beautiful course stops on the PGA tour, for increased memorablility.  I suggest they top it off by blaring out Wiz Khalifa’s Black and Yellow on the 18th green if Snedeker putts in for the win on Sunday.  Now THAT would create lasting brand awareness!