More Than a Match Won

Sure, the headline is that Graeme McDowell defeated fellow Irishman Padraig Harrington yesterday in the first round of the WGC Accenture Match Play event.  Sure, it put yet another red line on my bracket.  I barely noticed that though.  I was so completely enamored by McDowell’s G-Mac by Kartel shirt and sweater combination that I forgot about my bracket woes for a moment. That alone should tell you how great the style was!

McDowell has made a statement in the golf world ever since he won the 2010 US Open at Pebble Beach.  In January of 2012, he also made a statement in the golf fashion world when he began wearing his own collection of golf apparel, G-Mac by Kartel.  The G-Mac by Kartel collection is described as having a stylish, sophisticated, luxury upmarket feel.  The stand-out pieces worn by McDowell yesterday are shown and described below.  These eye-catching threads are absolutely fantastic and totally unique.  I am beyond impressed. 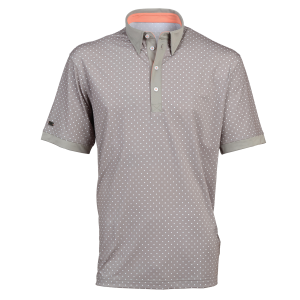 Shirt: Gracehill in Oyster. It has a two-piece collar with a four button placket and contrast color polka dots, placket and button thread. It is a polyester shirt which is UV Cut for protection against the sun, up to factor 30 and Anti Microbial to help prevent unpleasant odors.

Sweater: McButton.  McDowell wore this in a sweater vest version during match play, but unfortunately it is only available for purchase in the long sleeve version. I feel the long sleeve is equally as fabulous.  It is a cashmere blend six button cardigan with contrast color on the inner collar and stainless steel buttons.

Learn more about the G-Mac by Kartel Collection: http://www.gmacbykartel.com/about-gmac

← Not So Swede
Iliac Golf- Little i Big Impression →